Welcome to week 2 of our new normal.

Unfortunately, for those of us in Lagos it does not include traffic free roads. As individuals and companies alike continue to adapt and adopt new ways of living; we will be looking at the following stories this week:

Most of us are aware of the recent erratic behavior of billionaire tech maverick and investor, Elon Musk. From giving his newborn son an unpronounceable name, sending tweets that caused the shares of his company tank by over 10% and selling all his physical assets; he has been very busy lately.

Just last week, he also insisted on reopening his California Tesla factory against the governor’s wishes and openly stated that he was prepared to go to jail for doing so.
All this should not distract from the fact that we can learn a few things from Elon Musk:

In disrupting these industries, Elon Musk created alternative ways of doing regular things.
Anyone who has driven a Tesla will tell you that the experience is second to none and this is reflected in the market value of the company.

In 2017, he promised to build a battery large enough to solve the electricity problem in South Australia within 100 days or forfeit payment. The battery was delivered on day 60. Since then, the company has gone ahead to build and deliver similar batteries globally.
In fact, he was once considering Nigeria as a market for the batteries (if you ask me, there is a huge market for it)

All major investors tend to put their money where their hearts are. We all can learn from that.

According to the NBS Consumption Expenditure Pattern in Nigeria 2019 report, Nigerians spent a total of N22.7 trillion on all categories of food. 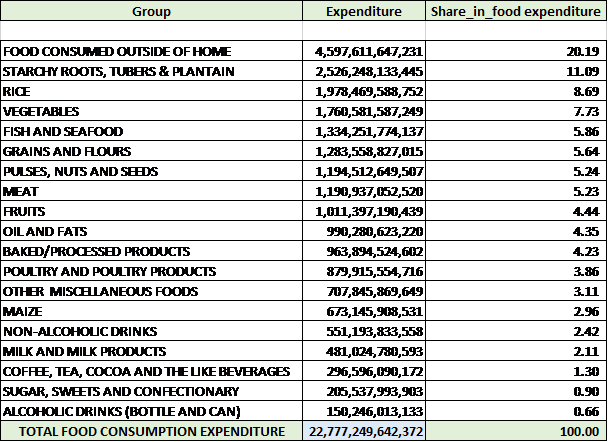 The tables below show the breakdown per food category and geographical region:

In the same Consumption Expenditure report, an analysis was made of the amount of money spent on nonfood items in 2019.

The term “personal finance” says it all. It is personal and specific to each one of us. There are basic principles but at the end, it depends on the person.
Below are some of the ratios we should monitor on our personal finance journey:

50% to be spent on needs (groceries, fuel, food etc)
30% on wants (entertainment, grooming etc)
20% to be saved/invested

This is just a guide and is dependent on where you live and income level. The aim is to spend lower and save more.

This guide helps determine asset allocation.
A younger person would allocate more funds to shares than an older person would do.The aim is to allocate funds based on risk appetite and age

The aim is to have an idea of how much we would require to spend our retirement comfortably.
Nigerian employees, this calculation should factor both our Retirement Savings Account (RSA) and funds being invested personally.

Lagos and Imo States are the only 2 states who spend more on non-food items.

Moderna’s shares rose 12% in value last week when it was announced that it had a coronavirus vaccine currently undergoing human clinical trial.

According to the professor, he invested in the company because it was in line with his philosophy of investing in what businesses he understood. Makes great sense, if you ask me.

Talk to you soon.

We Operate a Fully Structured Online Members-Platform Where We Share, Discuss, Plan Our Investment Options. We accept members from all over the world and we guide accordingly on the best investment decisions that work well for them.